As part of Magaly Guerrero's "All Hallow’s Grim 2013… So Good, So Dark", I offer you some of my thoughts on Light and Dark...

Just the words 'Dark' or 'Darkness' can elicit a wide range of emotions. Feelings of mystery, covert operations, fear, curiosity, uncertainty, sensuality, bondage, depression, death, dying, introspect, a Stephen King novel, Lydia from Beetlejuice, or any of the Addams Family just to name a few.

Darkness, for witches and pagans, simply means an absence of light. Nothing evil there. We understand that without darkness there cannot be light. And vice versa. Each lends balance to the other. Except for clowns. Apparently clowns scare the beejezus out of a lot of people... but that's a post for a different day. ;-)

Night time offers peace and solitude. It can be a time where your mind is able to be quiet, or where you are able to delve into thoughts you had throughout the day that you could not fully concentrate on because of the daytime external noise. Jobs, family, running errands, etc.


We all have a shadow self; a "dark side" if you will. Finding the light within the darkness is an exercise in self-exploration and self-acceptance. Our ability to face and embrace this aspect of ourselves is what can keep us mentally and emotionally healthy throughout our lives.

The beauty about darkness is that it offers us an opportunity to see that which is hidden. We can learn to overcome fears... or have a blast being scared out of our wits. After all, isn't that why horror and spooky movies make the big bucks? ;-) From Bela Lugosi to Stephen King and Freddy Kruger, the successes of horror stories and films make for a fascinating study in the Human Fear Factor.


Are you a person who is uncomfortable in the darkness of your mind? Do you sleep with a light on? Do you pull the covers over your head if you hear a bump in the middle of the night? Take a moment to delve into that brightly lit imagination you have, the one that exists in the dripping-with-fear darkness in your mind. Visualize something of beauty, a rich color that you favor, or a kitten!

Look at Dexter over there to the left. He was a lost little kitten who found his way to our front porch. Scared and lonely, crying in the dark. And a ball of black and white cuteness. Of course, he is named after the lead character in the Showtime series "Dexter". We were so sad that the series had come to an end. And 3 days after the last episode, this little sweetheart showed up. As kittens will do, he is living up to his name - exhibiting an ornery dark side along with a bit heaping helping of Too Cute.

See? There really is Beauty in the Darkness.

Email ThisBlogThis!Share to TwitterShare to FacebookShare to Pinterest
Links to this post
Labels: All Hallow's, darkness, Pagan Culture, samhain

Normally, when you caution someone not to mess with something, or not to test your skillz, they will turn around and do exactly what it was that you cautioned them against. I feel, at times, I'm trying to do a good Samaritan thing... a "kindness", if you will.

It takes a lot for me to get to the point of firing off a warning shot. And let's face it, those of you who know me well, know that I don't suffer fools for long.

So here's what I'll say today instead: Go ahead, play with fire. Go ahead, mess in the affairs of a Priestess of The Morrighan. Please. It'll be GOOD for you.

*uncrosses fingers behind back and prepares the cauldron*
Posted by Snowy at 3:51 PM 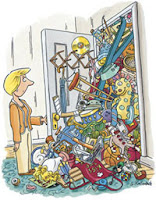 Stuff. We all have it. Stuffed in closets, sitting on a coffee table, shoved in kitchen cabinets, displayed on mantles, hidden in the sock drawer, batted under the couch by a beloved family pet, hanging on walls, hidden behind the toothpaste and jars of face cream in the bathroom, hoarded in an attic, buried in the garage (or in your back yard if you have dogs hehehe), crammed in a computer desk, weighing down bookshelves, or collecting dust bunnies under the bed.

We collect junk all year round. The "As Seen On TV" avocado masher we just had to have (because we MIGHT want to make that guacamole some day!), coffee mugs from every amusement park we ever visited, popcorn tins from Christmases past, sixteen pairs of jeans we MIGHT fit in again some day, old cell phone cords, floppy disks (remember those??), umpteen pens and pencils, and if you live in my house - 30 different screwdrivers in 7 different drawers around the place. And shoes, shoes, and more shoes. My middle name is Imelda Marcos. (Google that, you younger ones who don't get the reference! LOL!)

For years, I had much of my "stuff" in storage. When I moved back to Pittsburgh from Baltimore in 2004, about a third of my stuff went into a storage unit. Just not enough room in the house we bought. To clarify - this particular "we" was my ex-husband and I. When we sold that house 3 years later and had nowhere to go but 2 adjoining efficiency apartment rooms at a local hotel, over 75% of our "stuff" went into an even bigger storage.

Eight months later, we split up. I left the hotel and moved into a house I rented. My life was

undergoing a HUGE upheaval and change. My stuff stayed in storage. I was starting somewhat "new". But the stuff... haunted me. Fast forward a few years and I have a beautiful new life with a wonderful man. We bought a house, and moved my STUFF here. It filled the garage. It filled the downstairs enclosed back porch. It filled one bedroom closet. And still, it sat. In boxes.

This stuff continued to haunt me. I felt the blockage of energy every time I went out to the garage. I stopped doing that (going out to the garage). It gave me such horrible anxiety to look at all that STUFF. I didn't have the time or energy to deal with it. With owning a retail shop and not always being in the best of physical health, it was just too monumental of a task.

Fast forward to December of 2012 when my husband and I decided that we'd had enough of the harsh Pittsburgh winters, and decided to head south. Our goal was to close the retail shop, clean out the house, and move to Tennessee. YAY! This was going to be GREAT!

The first hurdle was, of course, closing the retail shop. This resulted in a NEW need for storage space to store all the STUFF from the store. Oh my! We accomplished this task on March 31st and then spent a week just chillin' and relaxing at home. We were beat. Physically, mentally, you name it.

Last week we were blessed with the NICEST weather this region has seen since late September. Sunshine! Warmth! A nice breeze! And so what do we do? We finally tackle The Garage. This is where I really wished I had taken pictures to chronicle the "Before" and "After".

If you're like me, you can appreciate the hopeless and helpless feeling of "OH MY GODDESS WHERE DO I START?" But, with my honey by my side, we opened the garage doors and he plugged in the satellite radio to provide some "Music to throw shit out by". And so it began, one box at a time, one bag for Goodwill at a time, one trash bag at a time, we cleared the junk, the shit, the crap, the hoard pile, and WE DID IT! I ended up with 3 plastic bins out of untold tens of boxes that I filled with all the stuff I really needed to keep. Goodwill made out like a bandit. We reclaimed 90% of our space in the garage and back porch, and found that this move to Tennessee was going to be a TON lighter than we had thought.

De-cluttering feels good. Energy is flowing freely, I feel like a huge weight has finally (after almost 10 years) been lifted from my shoulders. Oh, don't get too excited. I still have several rooms INSIDE the house that need more de-cluttering. Just yesterday I went through my massive computer desk and another bag of goodies was filled for Goodwill. This morning I finished cleaning up/cleaning off my desk. For the first time in a year or so, I actually ENJOYED sitting at my desk! What a concept.

This De-Cluttering concept is powerful. We attach a lot of emotion to THINGS. They might invoke fond memories, or cause us a moment of guilt at the thought of throwing them out. These feelings are detrimental to our growth. As I have been going through the house and garage, I forced myself to think about two things; 1: Have I even LOOKED at this item in the past year? Two years? 5 years or more? And 2: if this stuff was stolen, burned in a fire, or otherwise lost to me by hands other than my own, how would I feel? And the overwhelming answer was that I WOULD SURVIVE.

I found MY power in The Power of De-cluttering.  I hope this story inspires you to dive into some spring cleaning and perhaps reclaiming not only some space, but finding a renewed sense of energy once the energy has a chance to flow again.

Until the next Witching Hour,

Snowy
Spencer, TN, United States
See "About Snowy" for a more in-depth look at our lives.

Join me on a journey that will ENCHANT and AMAZE your life and business!